“Two Ladies”, the title of this afternoon’s concert, referred to its two violin soloists, Triin Ruubel and Juta Õunapuu-Mocanita. They, along with the strings of the Tallinn Chamber Orchestra, presented a programme of premières from young Estonian composers. Each work took a different approach to the concertante combination, occasionally flirting with the traditional idea of solo melodic lines accompanied by ripieno ensemble, but more often mixing the forces in more subtle relations. The Estonian Music Days festival, of which this was a part, takes an all-or-nothing approach to programming, giving entire concerts of new works for a specific combination of instruments. Clear patterns emerge between the various composers, national characteristics perhaps, or cross-influences, but each has a different approach, ensuring sufficient variety to carry the programme. 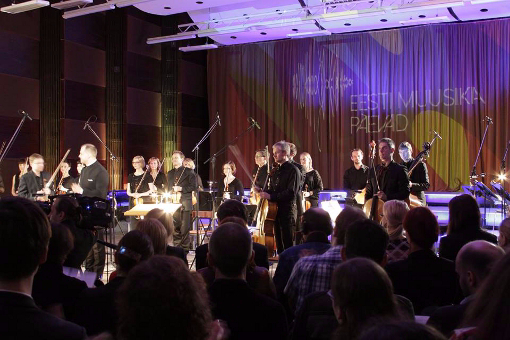 After a less than promising start, the stolidly conventional Emegrane by Krisjan Randalu, the programme got up to speed with Ascending… Descending by Liisa Hirsch. As the title suggests, the music here is mostly based on slow glissandos up and down the fingerboard, a simple device, but made considerably more sophisticated by the way it was projected around the ensemble. Each of the players has a separate part, entering at different times and often in close imitation. The result is narrow clusters, covering a range of about a third, which slither up and down the pitch space. Impressive, too, was the way that soloist Ruubel guided the music around the ensemble, taking over at the end from conductor Atvars Lakstīgala to cue the players, leading by example for each of their entries.

Elis Vesik took a similarly focused and direct approach to texture in her Force of Nature. Here, the guiding idea was a rhythmically irregular bariolage effect, in sudden outbursts that bounce back and forth between adjacent strings of the instrument. This idea was also passed around, both between the two soloists, and from them to the individual players of the ensemble. The resulting sounds were brittle, often aggressive, but just as often imbued with a gentle, almost spectral radiance.

A new strand in the festival this year is called “Mini EMP” and is dedicated to the participation of even younger musicians in both composition and performance. To that end, the following work introduced another two ladies, Triin Piirsalu and Triinu Veissmann, 8th and 6th grade violin students respectively, to play Eduard by the Brook, by the slightly more senior (he’s 25) Sander Pehk. Nothing radical in the music here, but a fine performance from these young players, and a refreshing interlude in what was otherwise a continuously challenging programme.

Fulfilment, by Mariliis Valkonen, brought percussion into the mix, which proved a valuable addition, especially in the highly gestural, sharply defined musical language here. Soloist Õunapuu-Mocanita presented a series of complex but insular motifs, each shadowed by the ensemble, and particularly by the percussion. But more textural variety would have helped, especially given the expanded ensemble. This was one of several works presented over the weekend that ended with an unexpected twist, in this case the soloist swapping instruments to play the last few notes on a lower scordatura range, the G-string of the alternative violin tuned downwards. But why wait until the final few notes to introduce this interesting effect?

Although only in her early 40s, Helene Tulve is one of the more senior and established composers to be featured in the festival. Her compositional experience, and particularly her idiomatic writing for strings, shone through in higher than the soul can hope and mind can hide. No orchestra here, just the two soloists, and a surprisingly limited palette of colours and effects, but the results were satisfyingly expressive, communicating in a clear and direct language. Lyrical lines for the two violins were generally played with wide vibrato, yet any implicit Romanticism was countered by the astringency of the harmonies between the two parts. And although relatively simple, the textures changed and evolved as the piece went on, while all the time sustaining the intensity.

A short trip across the border to conclude the concert. Conductor Lakstīgala is from neighbouring Latvia, and brought with him a work by Kristaps Pētersons. Not for the first time this weekend, the inclusion of a non-Estonian work served to highlight the many similarities between the native composers. Pētersons, who himself is only in his early 30s, and whose Chess was here receiving its first performance, writes faster music, faster in its development and in the delivery of its ideas. All the Estonian works that preceded seemed expansive in comparison, and united by a focus on colour and texture. Still, this punchy and concise work proved an excellent closing number, especially for its exhilarating and undeniably conclusive ending.